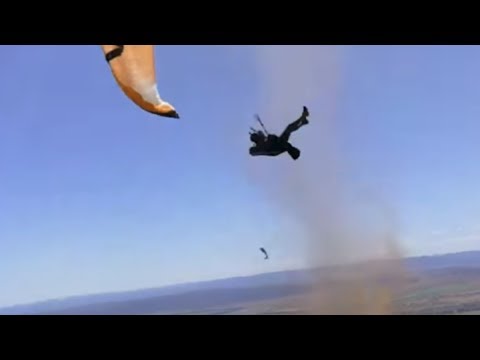 Paragliding in high altitudes lead to many failed landings & accidents when pilots forget to strap tourists to the hang glider & glide off not being attached. Here are the risks of this extreme adventure sport.

What is it?
Paragliding is an adventure sport that involves the use of a free-flying wing to which the pilot is connected by a harness and a network of suspension lines. The fabric wing has vents at the front which maintain its elliptical shape as air pressure builds up. The aerodynamic forces of the air flowing outside the wing and the suspension lines enable gliding while maintaining its shape. The pilot can steer, adjust speed and flare, through controls in each of their hands that connect to the left and right sides of the wing. Launching and landing are done into an airstream, either by running or being pulled. The wing gets into a position that can carry the pilot’s weight before lifting them off the ground. Even though the paraglider doesn’t use an engine, flights can go across hundreds of miles and thousands of feet up into the air.
Number 5 Matt O’Donnell
As he was preparing to take off of a cliff in New South Wales, Australia, experienced paraglider Matt was caught in a whirlwind, commonly known as a dust devil. This happened on January 2, 2019, and a video of it went viral online. Fortunately, thanks to his experience, O’Donnell kept his composure and maintained control of the glider despite being suddenly and rapidly spun around.
Where Is It Located?
A paraglider is unique among human-carrying aircraft since it’s so portable. On average, wings have a surface of 220 to 380 square feet, a span 26 to 39 feet and a weight of 7 to 16 pounds. It may sound like a lot but the harness and wing can typically be stored inside a single backpack. This means that transporting the equipment is easy and that paragliding can be practiced virtually anywhere, provided that the wind is right. The earliest patent of a gliding parachute came in 1952, from Canadian pilot and inventor Domina Jalbert. The first official paragliding world championship was held in Austria, in 1989. Nowadays, popular paragliding destinations include the mountainous regions of Germany, Austria, Switzerland and France but also areas in Brazil, Australia and Turkey.
Number 4 Peggy Williams
In May 2009, Peggy Williams was paragliding in Andalusia, Spain, when a freak gust of wind caught the wing of her glider. The 47-year-old was catapulted through the air and plummeted 20 feet onto a rocky outcrop below. Since her wing was still inflated, she was dragged stomach-first over the jagged rocks for what she said felt like “an eternity”. Her strong abdominal muscles acted like a “girdle” and protected her.
How?
Paragliding takes pilots thousands of feet into the air, at speeds of anywhere from 12 to 47 miles per hour. The worst thing a pilot can do is misjudge their abilities, fly when they’re tired or in harsh weather conditions.
Number 3 Ronaldo Faoro
In March 2015, California man Ronaldo Faoro and his daughter Sierra were on a tandem flight near Santa Barbara. Faoro was an experienced pilot who wanted to show his daughter the beauty of paragliding. Unfortunately, the flight ended in tragedy.
Number 2 Incident in San Diego County
One of the men was qualified to fly on his own while the other was in the process of getting his advanced qualification.
How?
Survival in paragliding is a combination of proper gear, proper training and proper judgement. To minimize risk, you should use a wing designed for your proportions and skill level, a cushioned harness, a helmet and a reserve parachute. Other pieces of equipment include a variometer, which helps the pilot determine sinking or rising air, a radio and a GPS. Always check the gear for any faults prior to a flight. You should be fully aware of the features that come with the paragliding site, including obstacles and wind conditions.
Number 1 Grant Thompson
Grant Thompson had built a YouTube channel entitled “The King of Random” with over 11 million subscribers and billions of views. Thompson worked as an airline pilot for more than a decade, then shortly in real estate prior to becoming a successful YouTuber. The 38-year-old had taken off in a paraglider near Sand Hollow State Park, in Utah. In an Instagram post, Thompson’s family asked his followers to do a “random act of love and kindness” to honor The King of Random.